This project is about building a cheap DCC command station. What is DCC, I hear you ask. DCC stands for Digital Command Control and is a system that is widely used in digital model railroads. There is a fairly good description of DCC on the NMRA site.

Such an elementary base station able to produce DCC consists of three main components:

For the Arduino UNO I chose the (fully compatible) Velleman ATmega328 UNO ontwikkelboard. 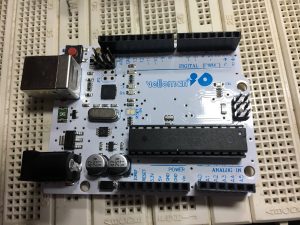 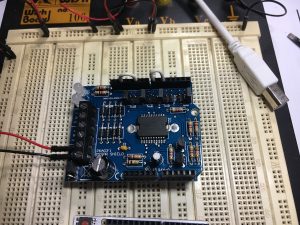 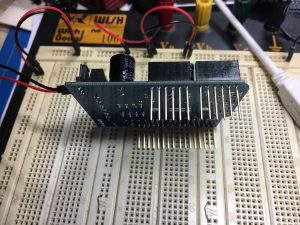 Velleman Motor Shield for Arduino on it’s side

The motor shield can be stacked on top of the UNO: 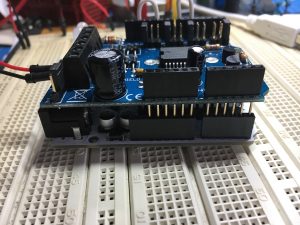 The DCC++ software can be downloaded as freeware from Github.

Although the Velleman kits are indeed functionally and electrically compatible, some changes must be made to the code and to the hardware to make things work.

The cook book I used is a series of four video’s that explain in a very good way to build the hardware we need for this project.

The video’s assume the use of the original Arduino boards, so there are some differences that I will describe below.

To work with the Velleman kit we must wire some jumpers differently from what’s in the videos. See description below the picture. 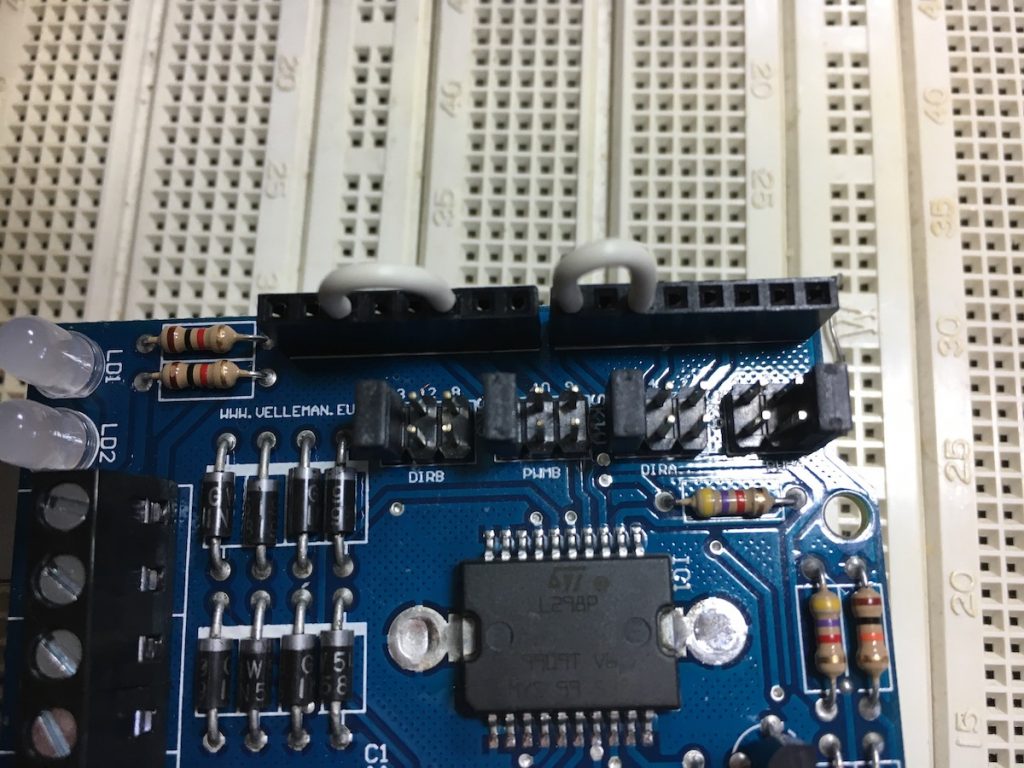 The motor shield has two outputs, A and B. Output A will drive the DCC signal for our programming track and output B will drive DCC for the main track.

The programming track, output A:

The main track, output B:

Now we must take care of our motor shield so that it gets it’s power from an external source, not from the Arduino. 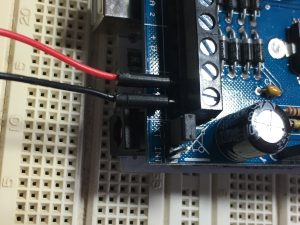 Right next to the external power terminal there’s a jumper that can be set to Int, in which case the motor shield will draw its power from the Arduino on which it is stacked.

We definitely do not want that because that Voltage would be way too low for our purpose. We want to use external power for the motor shield.

So we set this little jumper to ‘Ext’.

This concludes the changes in the hardware.

There are two files that must be changed:

This file contains a line setting the variable DIRECTION_MOTOR_CHANNEL_PIN_A to 12. The Vellman kit can not use this pin, so we change this to 7:

Then there’s the file:

This file contains code to set a pin for monitoring at program startup. The Velleman can not use the coded A5 pin, so we change this code to set it to A4:

And that’s it! Now we load the code and hook up our DCC command station!