Everyone with at least a minor interest in technical stuff has heard of IoT, the Internet of Things. In this IoT network it’s all about connectivity, about a network of physical devices, vehicles, and other items embedded with electronics, software, sensors, actuators, and network connectivity which enable these objects to collect and exchange data. Apart from the devices themselves, two things are needed, a method or protocol of exchanging information, and a way to tie things together; make information useful, initiating actions, etc.

In this autumn break I am diving into this IoT and see what we can do with it, using Raspberry Pi’s and perhaps Arduino’s.

To be able to exchange information I will be using MQTT or “Message Queue Telemetry Transport”. It basically consists of clients that can publish messages and / or subscribe on them, and a broker (sort of a post office). You might recognise mqtt because I used it for communications in my elevator project.

To be able to make things happen I will use Node-RED,  a program that can tie things together, using a host of resources, amongst which the afore mentioned MQTT. It has been developed by IBM. It’s a program coded in Java that runs in a web browser and allows us to create ‘flows’ of information and actuate Things.

In my test setup I use three machines:

For this test I was thinking about home-automation, so that determined the direction of my efforts and the names for the various functions, see the picture on the right.

This is a control panel that I created in Node-RED and that was populated by buttons in what is appropriately called “Dashboard” in Node-RED.

This is a very nice configurable way of creating a virtual dashboard in addition to physical buttons.

Another possibility in Node-RED is to read all kinds of things from it’s environment, for example the time it takes to ‘ping’ another network node. For example, for my test I used npo.nl, cnn.com, google.com and amerikaanse-treinen.nl.

I created graphical representations of the ‘ping-times’ and displayed them on a second panel. See picture on the right.

On Galileo I installed:

On Columbus I installed:

The Node-RED flows look as follows: 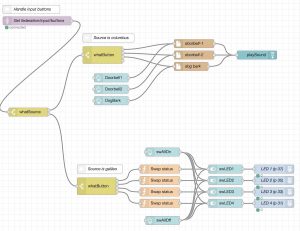 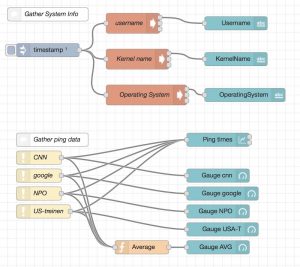